A UA professor received hate mail and emails after videos of his lecture regarding Republicans and Fox News viewers surfaced on the Internet.

The videos showed Pat Willerton, an associate professor in the School of Government and Public Policy, during a lecture on Oct. 8 in his class, “Politics, Policy and Governance: The U.S. and the World.” Some of those who have seen the videos accuse Willerton of denigrating both Republicans and Fox News viewers and creating a hostile environment in the classroom.

Willerton said he has received a fair amount of hate mail and email regarding the videos. One particular email he received was troubling, he added.

“The last full paragraph said something to the effect … that I’ll end up with a bullet in the back of my head,” Willerton said. “Well, that’s a hell of a thing to read.” 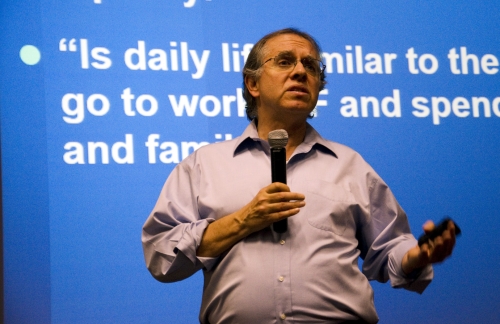 The slides shown during Willerton’s recorded lecture cite a study from Fairleigh Dickinson University examining people’s knowledge of current events and the news sources they rely on, showing that both Fox News and MSNBC viewers scored low in the survey.

Chris Sigurdson, senior communications adviser for the UA, said that the university defends Willerton’s right to follow his own approach in conducting the class.

“To all indications, he’s conducting the class responsibly, with a multitude of viewpoints and within his authority and expertise,” Sigurdson said. “As the professor, he has the academic freedom to teach the class within his expertise.”

Willerton disagreed with the claim that his lectures create a hostile environment, and said that the videos shot during class were taken out of context.

“Of course it was [taken out of context],” Willerton said. “That was just cherry-picking.”

Willerton also disagreed with the claim that his style of teaching and his viewpoints intimidate those who would dissent in the classroom, adding that he sees little evidence students have any fear of him.

“People will ask me tough questions,” Willerton said, “and if someone really doesn’t want to do that, then they can tweet me [during class]. It’s completely anonymous.”

Paxton Endres, a political science sophomore and a student in the class, said he agrees that Willerton’s teaching doesn’t create a hostile environment.

“What I love about Dr. Willerton is that he welcomes feedback and responses,” Endres said. “In fact, he encourages it, and when he is wrong, or if a student makes a valid argument, then he admits to it.”

Professors should also be able to express their own opinions, especially in classes about politics where students must learn to defend or argue certain sets of beliefs, Endres said.

Michael Schaller, a Regents’ Professor of history,said that professors shouldn’t be barred from expressing their personal political opinions because of their profession.

“We don’t put on blinders when we become professors,” Schaller said. “I don’t think you should use your classroom to promote a partisan political agenda, but I think it is perfectly valid to point out — in a class on history or politics — the implications of something. … If I do have a political barb, I make sure it is separate from the lecture.”

The only time professors’ politics should not be a factor is when it comes to grading, according to Endres.

Willerton has told the class that his personal opinions play no factor in grading and that his eight teaching assistants do his grading.

Willerton said he does bring provocative issues into the classroom and expects differing opinions on what he presents.

“There are over 1,060 kids in both my lectures,” Willerton said. “Someone is going to be troubled by something I say.”