The Week at the Arizona Capitol: March 2-5

This story appeared on Arizona Sonora News on March 5, 2014. 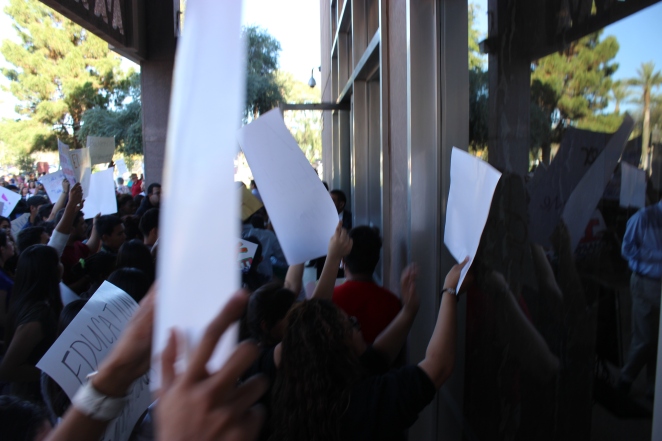 Arizona students attempt to enter the Senate building with their signs to protest the state’s budget on March 5 as the Senate Appropriations Committee met.

Late Thursday, it appeared the GOP leadership didn’t have the votes to pass the budget deal, but negotiations continued.

The new $9.1 billion budget proposal drew strong criticism from Democrats and hundreds of protesters to the Capitol on Thursday, including Arizona State University students who marched from the ASU Downtown campus against proposed university cuts.

Lawmakers were briefed Tuesday evening about the budget deal and details began emerging on Wednesday.

Here are some highlights from the deal:

— The new proposal raises cuts to higher education to $104 million, representing about 14 percent of state support. The cuts fall to each university based on enrollment: $56 million to ASU, $30 million to UA and $18 million to NAU.

— K-12 schools in the state will see a net increase in funding by about $78 million. The budget still recognizes the Legislature’s settlement offer of $74 million in the K-12 funding lawsuit, rather than the court-order $336 million.

— The Department of Corrections also sees an increase in funding by about $34 million, which is less than Ducey’s proposal of a $52 million increase. The new proposal also reduces Ducey’s call for 3,000 new beds for prisoners to 1,000.

— Medicaid also faces cuts with a 5 percent cut proposed to state reimbursement payments, which would likely shift the costs onto hospitals.

Friday would be the earliest the budget could pass as the Arizona Constitution requires at least three days for the budget bills to be heard.

If at first you don’t succeed…

Would you like the carry a gun into your local library? The House passed HB 2330, which allows people with valid permits to carry concealed weapons into public buildings and events. Gov. Jan Brewer vetoed three incarnations of the legislation during her tenure.

Rep. Randall Friese, D-Tucson, and other Democrats criticized the legislation on the floor.

“With the history of this legislation, with it having been vetoed three times before, I think we should move on to more important measures,” Friese said. He is a trauma surgeon who treated victims of the 2011 Tucson shooting.

Rep. Brenda Barton, R-Payson, the bill’s sponsor, defended the legislation, calling it a “God-given right” for Arizonans. “This is something that we have inherently,” she said.

Rep. Mark Cardenas, D-Phoenix, voiced concerns related to the costs of the bill. An entity would be able to keep their buildings weapon-free if it provides security personnel and a screening device at entrances. The Arizona Department of Administration estimated it would cost the agency between $10 million and $16.9 million for the first year and $9.4 million to $15.7 million in subsequent years.

Legal concerns were raised when the Legislature passed a similar bill from Mesnard last year regarding First Amendment rights.

This version passed the House unanimously and moves to the Senate for consideration.

Ducey signed into law a bill that would provide tax incentives to Apple for bringing a $2 billion data center to Arizona.

Apple announced last month that it would be establishing a “global command center” at a facility in Mesa. The Legislature moved quickly to pass the incentives after the announcement, introducing bills in both the House and the Senate before ultimately approving the House version.

“Not only is Apple bringing significant investment and hundreds of quality jobs to our state, but its move also will create a ripple effect — boosting businesses already here,” Ducey said in a statement.

Secretary of State Michele Reagan unveiled a revamped website for azsos.gov this week, which has been plagued with bugs in the past. Reagan said in an introduction video on the website that her office has been working for months to improve the website.

“Our goal is to reorganize the vast amount of information we provide to improve access, greater transparency and make it so you can find what matters to you most quickly and efficiently,” she said in the video.

The website, which posts vote tallies for the state on election night, had technical difficulties the last couple of elections causing frustration among those trying to report results.

Redistricting case at the Supreme Court

Top legislative leaders took Monday off to travel to Washington as the Supreme Court heard arguments in a legal dispute over who controls congressional redistricting in the state.

The case, Arizona State Legislature v. Arizona Independent Redistricting Commission, centers on whether the Legislature or a voter-approved commission has the ability to control redistricting within the state. The Arizona Legislature asserts it solely has the authority in the Constitution to redraw the congressional map in the state.

Speaker of the House David Gowan, R-Sierra Vista, and Senate President Andy Biggs, R-Gilbert, made the 4,000 round mile trip and returned to Phoenix in time for the budget drama to begin.