What you need to know from the budget deal

This story appeared on Arizona Sonora News on March 10, 2015. 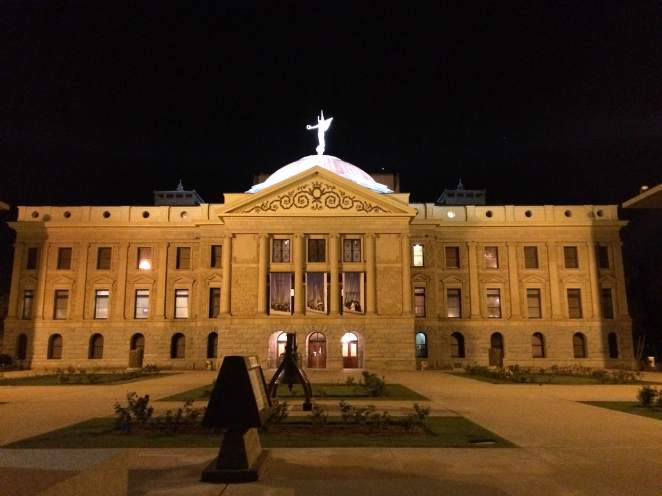 PHOENIX — By the time the sun rose over the Copper Dome of the state Capitol on Saturday, the House and the Senate passed a budget deal behind the Republican leadership’s blitzkrieg push to get the budget out and onto the governor’s desk.

Gov. Doug Ducey is expected to sign the budget this week. He lauded the Legislature’s budget as a “fiscally-responsible” way to fix the state’s structural deficit and balances the state budget. Arizona has been facing a $1 billion budget deficit.

“If we want to see meaningful and lasting improvement in our schools and economy, government must start living within its means and practicing fiscal responsibility,” Ducey said in a statement.

“This is a budget that reflects our state’s priorities and for that we should all be proud,” he said.

Democrats blasted the cuts in the $9.1 billion budget and the speed at which Republican legislators moved to pass it.

“Arizona’s Republican leaders have avoided making difficult fiscal decisions in this budget,” said Senate Minority Leader Katie Hobbs in a statement. “Instead, they chose to pass that burden on to counties, cities, schools, universities, hospitals and ultimately on to the backs of middle class Arizona families and the poor.”

House Minority Leader Eric Meyer, D-Paradise Valley, said in a statement that Republicans’ quick push on the budget made sure there was “little opportunity for public comment.”

The budget passed by the Legislature over the weekend included changes from the deal introduced into both chambers on March 4. The changes reflect concessions made by Republican leaders to win votes from members and address other concerns to get the budget passed in the shortest time the Arizona Constitution allows.

Despite public outcry, higher education saw just a slight reprieve from funding cuts with the final budget. State universities will face $99 million in cuts, $5 million less than the initial budget deal that came out last week, but still about $22 million more than Ducey initially asked.

University presidents and the Arizona Board of Regents lashed out at the cuts.

“Much has been said about ‘special interests’ in this budget debate,” Regents President Eileen Klein said in a statement. “Our interests are the students, families, employees and citizens who are fighting for a better life.”

K-12 schools in the state will see an increase in funding by about $102 million. Democrats, however, insist that with inflation and enrollment increases, the new funding still amounts to a net loss.

The budget also removes Ducey’s proposal as a part of his Classrooms First Initiative to shift money from outside the classroom to the classroom. Schools instead are able to spend the new funds without restrictions on where to spend it.

Teachers, students, parents and other education supporters protesting the lack of more funding for schools have become a regular feature at the Capitol in recent days.

The budget increases funding to the Department of Corrections by $34 million, which is less than Ducey’s proposal to increase funding there by $52 million.

Ducey’s call for a contract for a new 3,000-bed private prison also got reduced by legislators to 1,000 in extra beds for prisoners.

The increased funding to prisons inspired protesters in their criticism of lackluster education funding. Some carried signs reading, “I’m worth more than a prisoner” and “Fund education, not private prisons.”

Arizona’s poor will also take a hit in the budget deal with slashes made to Medicaid and welfare recipients.

The budget reduces the amount of time qualifying Arizonans can stay on Temporary Assistance for Needy Families, which provides benefits for poor families, from 24 months to 12 months. This would be the shortest lifetime limit in the country.

During overnight debate on the floor regarding the TANF cut, House Majority Leader Steve Montenegro, R-Litchfield Park, said he didn’t think anyone is happy with what’s in the budget, the cut will ensure there will be money in TANF in the future.

Lawmakers also cut state Medicaid reimbursements by 5 percent, which is a 2 percent increase from what Ducey proposed in January.

The budget scraps Ducey’s proposal to fund the Arizona Highway Patrol by increasing the motor vehicle registration fee by $8. Concerns were raised that the fee hike would amount to a tax increase.

The proposal was intended to stop the sweeps from the Highway User Revenue Fund, intended for roads, to the Department of Public Safety for the Highway Patrol and would have raised about $30 million.

House and Senate GOP leaders worked Thursday and Friday to round up votes from detractors within their own ranks.

In the Senate, Sen. Jeff Dial, R-Chandler, voted against the main budget bill and Sen. Steve Pierce, R-Prescott, did not show up to vote.

Republicans needed 16 “yes” votes in the Senate to get the budget through. With two members of the 17-members majority breaking ranks, the deciding vote was found in Democratic Sen. Carlyle Begay of Ganado.

The Senate tacked on $1.2 million in transportation funding for Begay’s district and he provided the final vote necessary to pass the budget.